TEAMtalk.com analyses the Leeds United U23 players fans are Googling the most and who is leading the race to a place in Leeds’ starting eleven.

The top six Under-23 Leeds United players have all hit the headlines for various reasons in the past six months, however, for the first time, TEAMtalk can reveal the highest annual searches for the past 12 months and the results are interesting. 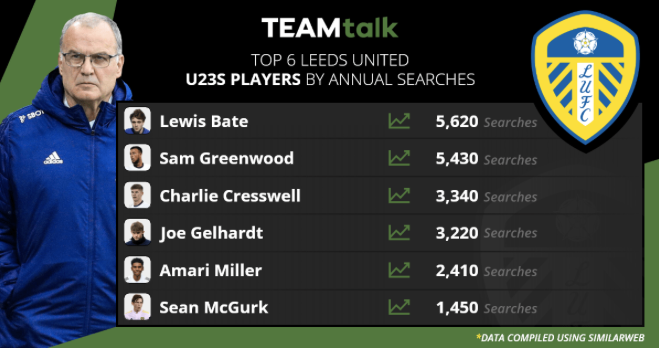 Lewis Bate ranks first as the U23 player with the highest number of searches of the past 12 months to October 2021. Signing from Chelsea F.C in July 2021, Lewis Bate was already a well-known, promising young player in the Chelsea ranks. The profile of Chelsea and the size of their fan base will of course contribute to the overall number of monthly searches of a player.

Over a period of 12 months to October 2021, the growth rate of searches for Leeds’ U23 players has steadily increased. Most notably, the player with the largest increase in searches is striker Joseph Gelhardt. Month-on-month searches for ‘Joe Gelhardt’ in October 2021 increased by 139%.

The rise in interest around Gelhardt first spiked in September 2021 when Joe made his senior debut for Leeds United as a second-half substitute for Mateusz Klich in an EFL Cup third-round tie against Fulham.

Gelhardt has most recently been out of action with an injury. The key metrics of injuries, player popularity, and transfer talk all tend to influence the overall average number of monthly searches for a player from a fan intent perspective.

TEAMtalk also discovered strong month-on-month increases in searches for Sean McGurk, with searches for the player increasing by 92%. Sean is most recently training with the Leeds United XI and therefore joins the race with fellow teammates Sam Greenwood, Amari Miller, Lewis Bate, Charlie Cresswell and Cody Drameh for a first-team spot. Both Cody Drameh and Charlie Cresswell are future England first team prospects with both players just being handed their first England U21s starts.

Despite month-on-month increases for both Joe Gelhdart and Sean McGurk, there were notable decreases in searches for the remaining three players listed in the table.

TEAMtalk discovered that over the past six months, Amari Miller averaged 4,656 searches (April to September 2021) but saw a notable 82% drop off in October compared to September. This could suggest that Leeds United fans are less engaged in searching for Amari based on lower levels of stories in Google News on the player and because or perhaps because of impressions made in performances.

Notable rising queries around Leeds United U23 players outside those mentioned above include: ‘Jack jenkins leeds’ (up 1,828,650%) and ‘max dean leeds united’ (up 690,250%). Google Trends suggests that these two players have generated the highest volume of rising queries out of all the players in the Leeds United U23 squad, showcasing the next batch of young players capturing the imagination of Leeds fans and others.

“We used search intelligence to research interest in Leeds United U23 players utilising Similarweb for a number of reasons. Firstly, at a basic level, we wanted to better understand what fans are searching for to help us to understand how TEAMtalk can better serve sports fans, in this instance fans of Leeds United.

Secondly, 2021 marked the first time that Elland Road has hosted a series of home fixtures for the Under 23s, making the games and players more accessible for Leeds fans following the younger players.

We understand Marcelo Bielsa likes to involve young players with the first team, however, these new insights allow us to assess and project which U23 players are most searched for by fans and which are leading the race to break into the first XI”.