Welcome back to our new monthly feature, 'Behind The Headlines'.

We're continuing to dive into the minds of our award-winning journalists with a review of some of our best or most interesting pieces of content from across our network in recent weeks.

In this month's edition,  PlanetF1, TEAMtalk and LoveRugbyLeague are in focus.

"PlanetF1 is largely news-driven, it is not often that we have a feature in our top ten hits for the month but this one was a gem.

Simply put it headlines the names 'Ferrari' and 'Mercedes', two of our biggest draw cards, and then Oliver nailed it with an insightful and well-written piece with his knack of drawing in the reader, adding colour to the numbers, and tying in the events that led to this moment in F1.

That it is about Mercedes' struggles and Ferrari's part in that, you can't go wrong with that these days as fans are tired of Mercedes' dominance - everyone loves to see the mighty fall from off their perch.
Although no one believes this is how the story will end, it has added a bit of intrigue to the start of the new F1 season."

"Last month's exclusive on Dele Alli was a piece that hit six figures with regards to page views on TEAMtalk. It was certainly an article that resonated with fans."

Just what has happened to Dele Alli is what we are all asking. At 25 he should be coming into the prime of his career, instead, he threatens to be left on the football scrapheap.

Signed by Frank Lampard at Everton in January, Lampard spoke about his "trust" in the former England man. But 10 weeks later Alli is yet to start for Everton and a huge question mark now surrounds his career.

Our source has told us that Lampard could look to offload Alli this summer without the club paying a penny to Spurs. The first instalment of the prospective £40m deal is only due once Alli has played 20 games. And that will not happen this season and in fact may never happen, with Everton "considering severing ties prematurely" this summer." 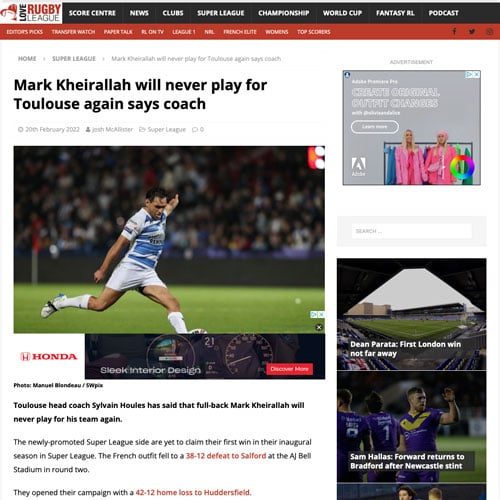 "This was the final nail in a story that had been developing for the previous month, following the tightening of coronavirus restrictions in France that required all sportspeople to be double-vaccinated.

One of our reporters was at the press conference following Toulouse’s opening game of the season at Salford, where their coach confirmed that long-serving, star full-back Mark Kheirallah wouldn’t play for the club again.

His future was subject of much discussion at the season launch, where our team questioned coach Sylvain Houles, and then in the build-up to the season opener, an Instagram post by Kheirallah seemed to suggest he was back in the frame.

With Toulouse being new to Super League, and Kheirallah being an exciting player, fans were keen to know what was happening - especially as their captain had left in previous weeks due to the same issue. Kheirallah, despite being one of the most exciting players in the Championship in recent years, has never played in Super League and unfortunately, that looks like continuing to be the case."

Behind The Headlines: June 2022