Welcome back to 'Behind The Headlines'.

We're continuing to dive into the minds of our award-winning journalists with a review of some of our best or most interesting pieces of content from across our network in recent weeks.

In this month's edition, we're passing back to rugby. And it's worth mentioning, that once you've heard one rugby joke, you've heard them maul...

Planet Rugby prides itself on delivering an exciting mixture of news and engaging feature content. Our team of writers based in both world hemispheres keep hundreds of thousands of rugby fans glued to the site plus regularly update 90,000 Twitter followers and 47,000 Facebook fans.

With the business end of the Premiership, United Rugby Championship and Super Rugby Pacific seasons in full flow and the European Cup finals, it's been an exciting and busy time but Planet Rugby's James While managed to grab an exclusive chat with England Boss Eddie Jones.

Editor, Adam Kyriacou explains: "Aside from our usual weekly feature content that includes Who's Hot and Who's Not, Loose Pass and Super Charged, our features writer James While grabbed an online video chat with England head coach Eddie Jones."

"The pair discussed England's recent squad announcement, young call-up Henry Arundell, the Women's Rugby World Cup and much more. It is well worth a watch.

"Elsewhere on the site this month, our team of South African specialists have kept Springbok supporters up to date before the forthcoming international season."

Love Rugby League's the place is to catch up on all the latest news and get involved as our passionate team debate the burning issues in RL. More than 400,000 monthly users avidly use the website and our recently re-launched mobile app to check out the latest content and live score and be the first to know about scoops like this: 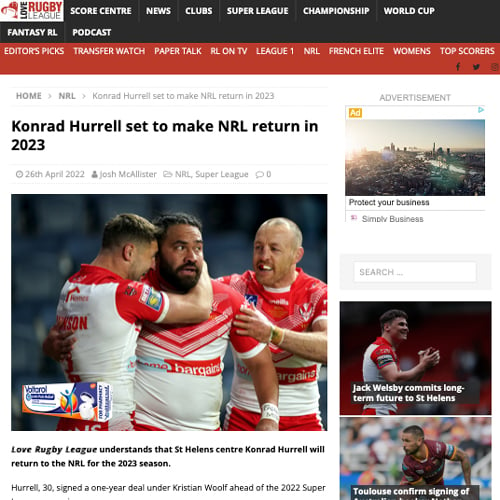 Editor, James Gordon picks up the story: "This was a big exclusive about Tonga international and current St Helens player Konrad Hurrell potentially returning to the NRL. Though its not yet confirmed by either club, when it is, this will be quite the scoop for our newest full-time journalist, Josh McAllister."

"Myself and the LRL team are now really looking forward to the World Cup at the end of the year, with all three tournaments being held in England, as well as what promises to be an exciting promotion and relegation scrap between Super League and the Championship and of course the Super League Grand Final at Old Trafford."

Behind The Headlines: June 2022